I have debated whether or not to blog about this, and decided it was best to share.  I’m having a breast reduction next Thursday!  I had so many cute, funny titles to this but that would just invite the freak-shows that tend to search the key word ‘boob’ or ‘fat’ and that’s all I need.. more freaks!

Well first, I’m not that shy.

Second:  I know some of you will wonder why I fell off the face of the earth for a month. And most importantly, I have received the BEST comments from so many followers. I still remain so humbled that I am being followed all over the world.  So many women have mustered the courage to strive to their fitness goals, regardless of size.  They tell me I was their mentor, or I encouraged them, but in reality, that they already had in them.  I've also had some negative comments, like one woman said I called myself fat just to get attention. (I can think of other things to do to get attention, and none of which would involve trying to eat right and exercise)!  I will pay it forward in my openness here!

I also write a little of this larger side of things for the many athletes I know who ‘want boobs.’ I've been asked “can I have your leftovers?”; “is there a donation to the needy?”; read on girls, you may not want them!

I've always been on the larger size. I can’t say I hate them, because sometimes it’s nice to HIDE MY FAT, or to wear a low cut dress. BUT, I kid you not, they are a PAIN!

I giggle every time I see / think about this cartoon

Yea it rings true, BUT I’m NOT AN OLD LADY.  Aside from the aesthetics, I see a chiropractor twice a week! Yes that’s 90 visits a year. 12 visits are covered by insurance.  Most people who know me say “really, you aren't that big” but I've always worn bigger shirts, and to be honest, nice cute shirts do not fit.

I am constantly battling the button bulge!  If I do find a shirt that fits, it is way too wide. I went through a period (like 8 years) that I would only wear a tankini and button my shirt half way up.  I was forever uni-boob!

I didn't care, I was just tired of bra shopping. Nothing ever fit and it was always a waste of money.  Victoria's Secret ‘measured’ me once, said 40D.  I was horrified at being a 40, but that didn't fit either. I had to stuff the girls into that bra and they would hang over the sides or UNDER.. God I hate underboob.

Then one day I went to a real bra shop and was measured properly.  36H.  Yes you heard that right. Yea I was much happier that my ribcage was a 36 and not a 40.. but an H? What the hell is an H? I saw this cup that I could store a small dog in. BUT, I didn't let it get to me, purchased those bras and actually felt a little smaller in my clothing. 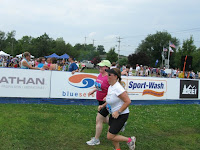 Workout gear sucks too.  For some reason they keep putting this stupid zipper in women’s clothing. Great! Except when I fall out of them! Countless times the zipper just flies open and exposes cleavage.  (where’s the photographer?).  I wear my bike jersey with the zipper down too, because it is too tight all the way up.  I was horrified to need a MENs XL!  Now, for some stupid reason, bike shirts are made about 4 sizes too small, but still.

Although there is one thing I will definitely miss… I have a built in pocket in the cleavage. Such a great place for my towel!  (yea think of your Great Aunt sticking Kleenex there.. yup that’s me). I'll never forget the look on my newer at the time riding partner's face. I pulled out my towel, dabbed my face and he said "WHERE DID YOU GET THAT???"  - uh.. here?

Once, I didn't have headphones, so I just put my phone on the mp3 player and shoved it down my shirt with the volume up. You should have seen the looks, no one could figure out where the sound was coming from!

When I did my first half marathon, I discovered the real chafing  pain of the breasts.  I have learned to run and not bounce through  Chi Running, but that doesn't take all the swaggle away. I KNOW that some people have slowed their cars at the moving and shaking of the well endowed women runners, but I assure you, it is not comfortable.  At that first half marathon, about mile 10, I dumped water over my head, and then felt this BURN.  Later I looked and saw that I had a 2 inch RING around my ribcage from the rubbing of the elastic of the sports bra.  I think I still have a small scar from that! 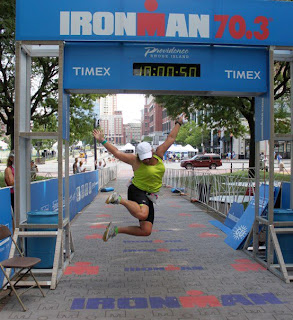 Yea this pic is great, but I hate the video.. You can REALLY see my boobs are going one direction and my feet another. I can’t wait for my entire body to cooperate and go the same direction!

I’m nervous of the surgery, I’ve never had stitches.  Yea 39 years old and I escaped that life event until now. I swear my brother was stitched enough for the both of us!  I’m nervous that I’m going to have to relearn how to swim and run.  Will I sink now that I’m getting rid of the buoys? Will I need my bike refitted now that I won’t have to knee  myself in the boob with every pedal stroke of the bike?

Will I run like the wind? (yea probably not).

Wish me luck and send any good thoughts next week. I will be down on most of my training for about 30 days. I’m not particularly excited about that, but I think in the long run, it will be awesome!