Eagleman '15 - or was it AFRICAMAN

I usually love this race and this race venue.   We arrived on Friday to share a house with some old friends and some new ones.   The house was amazing and I tried to figure out how I could stay and the owners not notice.   This was a view from the yard!

We were about 2 miles from transition so it was a perfect distance to help me finish my race! (more on that later).   The first thing we noticed though, man it was Hot. New England folks had a rough winter and spring just arrived, so dumping me directly into 90+ with 90+ humidity was quite a shock to the system, even for milling around Ironman Village. 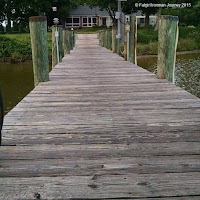 We checked in on Friday and just shook our heads at the swag. I know we don't do these races for the swag, but at $300+ a piece, Ironman keeps getting cheaper and cheaper. This year the "backpack" didn't even have the race name on it, just a generic 70.3.   Oh well. Disappointing, but it is what it is!

A ROUGH START TO A ROUGH RACE

Sat evening was rough for me, I don't know what weather rolled through, but it felt like my body was put through a washing machine.   Everything just felt weird. Not really in pain, but just uncomfortable. I couldn't sit, stand, lie down, sleep, run around. EDS sometimes is just stupid.  But I had to figure out how to just "go."

I have many races under my belt now, and none have stuck with me the way this race has.  You will see many race reports or comments with a common theme: Heat.   I would expect something like this in Africa, or Ecuador, but not Maryland in June!   I know the run is always hot, but this was something out of a science fiction movie.    I  can't even find the right adjectives, they all seem too cool for whatever the hell Sunday was:  hot, sizzling, dessert, blistering, boiling. It was described as the Zombie Walk, death valley in the East. 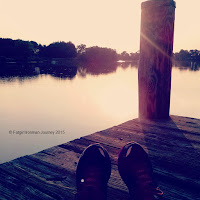 Sunday AM  we arrived onsite around 5:15AM.  It was already a non-wetsuit swim, as the water temp had climbed to 79 degrees.

There was very little excitement in the air like I usually see at a big race. Just tons of faces walking around. Little did I know but we would all become expressionless drones as the day wore on.    My wave was almost 8AM so the temp was RISING!

I found the swim to be ok. I was expecting 50 minutes in a wetsuit, so seeing 53 on my time without the wetsuit wasn't too bad. I eventually looked and saw I swam 1.4 instead of 1.2, so even better?  I'll take it.  Many folks complained about the swim and the current, but I didn't find it as bad as previous years.  There were no jellies and it was relatively consistent in the current department.   I usually swim outside in bigger races to avoid the crazies.

I had one guy swim up over my back then take the hardest pull and whacked me square on top of the head.  Of course with EDS this isn't good. He actually knocked a couple of vertebra out of place and did cause a headache.  I understand bumping and hitting, but there is zero reason to swim OVER someone and whack so hard on top of the head. I don't see how this is even possible unless it is on purpose.   Although Karma would prevail for him later in the race!

Because I was in a later wave, the temp was really taking off by the time I got to the bike.  Originally I had been really excited to tackle Eagleman with no wind, I was expecting a PR.  Instead I was just trying to survive.

The first 15 miles were pretty good. I managed an 18.5 average and was comfortable. I was taking in about 15-20oz of liquid an hour, eating on schedule, taking salt tabs and was feeling ok.  Then around mile 20 someone turned up the furnace.


I was so aggravated at my legs. I thought it was me and my EDS but everyone was slowing down. Everything was harder, breathing, eating, drinking.    Everyone was irritated too.   At one aid station they gave me a very warm Perform, so I asked the next volunteer in the row if she had any Ice. She said "YES", so I slowed, moved over and I landed about 2 bike lengths past the ice.  I turned and she said "well if you want it, go get it" (REALLY?) I've copped an attitude with 2 volunteers in my LIFE.  I'm the one who says thanks to every single person I can, police, kids, even the dogs that are out there, but this lady..woah.   I said "can you please hand me some?". Her reply was "No, get it yourself, I'm handing out water" !?!?!   of course I made a snarky comment back and rode away. I shouldn't have but man, really?  The next aid station was awesome and they helped a girl out with some ice that promptly went into my shirt!


Back to Karma guy.. I usually yell to see if broken down folks need anything.  I was approaching a guy who was off his bike and throwing things around.  I asked if he needed anything and he promptly ignored me.  As I rolled by, I heard a loud POP as he was filling his new tube with CO2, then lots of swearing.  It was the guy from the swim!  I giggled and rode faster.    I never saw him pass me, so I assume he DNFed after that 2nd tire explosion.  Moral is "don't be a douche, it WILL come back to you." 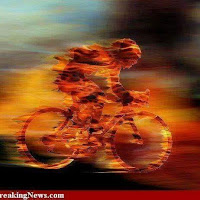 RUN?  aka the GREAT ZOMBIE SHUFFLE

Those that endured this next part have this bond that is unexplainable, we just existed together in some insane weather.  I've never experienced anything like this.  Everyone was walking EVERYONE.  If you saw someone even attempting something that looked like a run, other athletes were giving high fives.  I tried to stay hydrated, I briefly tried to run, but it just wasn't happening.  I was managing about an 18 min mile to begin with and that would not last long.   I very much wanted to quit at mile 1, mile 2, mile 3.   At mile 4, I saw Fireman Rob in his FULL GEAR. I was half naked and he was in his full suit, looking like death itself forced him to keep walking with a hot poker.  That fueled me. If he can do THAT, I need to keep trying until they yank me from the course.

Around mile 5,  I noticed that I had stopped sweating.  CRAP! CRAP!  Luckily I've worked enough races to know the early signs.  When your arms are dry, you're in trouble. If you don't do anything about it, you will then start with the chills, headaches, dizzy, and eventually pass out or throw up or both.   I slowed down, I knew I needed to keep my heart rate low and try to cool myself. I stuffed as much Ice as I could into my bra at every aid station.  I had to laugh at how many of us just had our hands down our shirts and pants,and it was 'normal.'   I started talking to medical at each station, just informing them of my issues.

I could not catch up on hydrating or cooling myself. I also know I was getting really close the the official cutoff of the race. I had never DNFed before, I didn't want THIS race to be a DNF.  I was totally cool with a technical DNF, but I wanted to cross that finish line.    I made it to mile 10.  The medical people I talked to there told me to get in the golf cart.  DAMMIT.  They took me (and several others) to the very packed med tent.   There wasn't much they could do for me "here have gatoraid" and "have some ice" (I already had a 5 pound bag in my shirt).

I also still heard the finish line, it was not closed yet.  WHAT? I could have walked those last 3 miles, I just couldn't walk fast enough to finish in time and to keep my dehydration from getting worse.  I talked to those at the finish line and he said I could take my medal and just go do 3 miles tomorrow. Um no thanks, I will do three miles NOW.

My friend drove my car home and I walked the 2 miles home, then up and down the street until my Garmin had my 13.1 run miles.

I completed 70.3 miles on Sunday.  I never put the medal on my head though, meh. I did complete it, I did deserve the medal for my wall, not my head.

Mother Nature felt bad about the hell she rained down on us, so this was her gift.  I sat and watched this amazing scene after I FINISHED my 70.3! 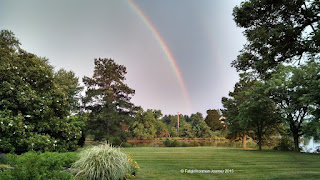 So what's next you ask? how about another Half Ironman this Saturday?  Patriot, here I come!