Last can be an evil word in any sport. No one wants to be picked last for dodgeball, no one wants to come in last in any race, but is it a stigma that isn't worthy of it's name!  Last really isn't a bad place to be.

When I started this blog, I often said "I have 2 goals, finish and not last."  I was TERRIFIED of coming in last, until the day I did.

I was so mad this day. It was a 'stupid little sprint', and it actually wasn't my fault I was last.  The swim was re-seeded and I started 10 people from the end in a 1 by 1 swim start. Meaning when I started, I knew I would be last.

I rounded the last corner and had the (insert expletives)  police woman following me.  She was in a car, she didn't look like she ever walked more than 10 feet in her life, and she was cheering for me  "you go girl, you got this." I was PISSED, I wanted to punch something, I wanted her to shuttup.  I didn't want to be last.   I rounded the last corner as they were tearing down the finish line, my friends ran in with me as I heard my name, no it wasn't for the finish, it was for a "winner must be present" prize. Luckily I had friends scream "SHE'S AT THE FINISH." I was mad,  but I finished.  It was one of those consolation races where everyone says "at least you finished" or "awesome you tried." I was mad at all of them, especially those comments from the ones who said that and have NEVER TRIED.

I had a 10K last year that made me angry, I was last, but I ran 3 or 4 miles BEFORE the 10K.  I was trudging up this hill and when you are last you get a pace-car, a Kayak, a biker, police car, police Harley, etc.  Well this day I had an ambulance following me.  Not only did I have the annoying rumble of a diesel engine, I had  2 guys who had ZERO interest in acknowledging me.  Normally you can have a conversation (like the police woman I wanted to shuttup ?!?). No if I slowed down these guys backed out of my way.  Grrr.  I eventually passed the finish line and I did hear one guy say "hey I saw her running BEFORE the race,wonder how far she ran?"

After that day I broke the "I don't want to be last" mold. SO some days I might be last, you never know who is in the field? I mean if you run a half marathon with all Kenyan runners, and you are last, how bad are you?  It is relative!

I was last for the Providence Half Ironman.  Actually I am THE last finisher EVER for the PVD 70.3! 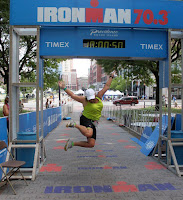 What did I get out of that? Well, I had a Harley pace 'car', I had my own SAG wagon, I had my own cheerleaders at the last 2 water stops, and I had the finish line TO MYSELF.  All of my friend were allowed IN the chute!  That's the only way I got this picture! My friend Lisa took it (the professional photographer missed this one and caught me on the ground after).

I've been doing this for a long time now, I know my strengths and weaknesses. I know I can DO it though.  I have way too many friends who say they could never do a half iron (or even Olympic).  They think you just take your speed from the shorter races and you should be able to carry that out for an endurance sport.  It doesn't work that way. You can't multiply your 5K speed out to get a marathon time.

I don't mind being last now. As a matter of fact, I will 'take' that spot from a woman who is upset about it. No need to tell us we're ahead of the guy that didn't start, we know it.  We know we're awesome.

I did a swim race on Saturday.  2.7 miles.  Who does a 2.7 mile swim? I knew before we even STARTED the race that I would be last. I knew most of the participants and there was NO WAY I would be close.  My goal was MY time not theirs.   I came in last by about 15 minutes, but still 30 min from the cutoff. Plenty of time and I did not fatigue myself.  I had my own kayaker the whole way, and let me tell you, THAT was nice.  Sighting was a little difficult and she was a great way to sight!.

If I want to do an Ironman in 8 weeks I cannot expend all of my energy on the swim. I must pace myself and if that means last, then I will be last.  It is a very individual sport!

What was VERY cool about this past weekend, Back of the Pack Productions is a race company that recognizes that the last athlete matters just as much as the first!  They give the exact same prize to last place as they do first place.  WOOHOO.. (If you have a chance to go support them, please do)!

It really is OKAY to be last!  I am looking forward to being last at Ironman Florida. I will get a Harley pace vehicle, TONS of supporters telling me 'you go girl'- (I welcome that now)!, a GIGANTIC standing room only crowd at the finish line, fireworks, and most likely have my medal placed on me by the Professional champion of the day!