Stop the Stigma - My Inspiration for MCM

In the 3rd part of the ‘why MCM’ series, today I give you my inspiration/ motivation for finishing the Marine Corps Marathon.  Bear with me, this is long but worth it!

As explained in the last post,  I certainly have the odds stacked against me on this race.  I’ve done a marathon before, but not ‘standalone’ and not with the issues that I’ve had this year.  I could just throw in the towel and say “ok I’m gonna rest” but a dear friend is pushing me.

I have to rewind a few years.  I met Dawn in 2012 while standing in line with Ironman Florida volunteers, waiting to sign up for our first 140.6 Triathlon.  We sat and giggled about the crazy people around us and about the long line that went around the corner. 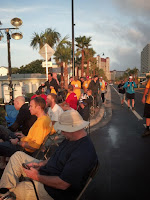 We talked for the few hours and even exchanged pictures of us throwing down $700 to sign up for this crazy race.  The internet is a great place these days, we kept in touch all year as we trained and became close.  She told me a few times that my story had inspired her, I often find that hard to believe on ‘fast’ athletes, but everyone is motivated by something!     We joked through the year about many things, including her star struck-ness (is that a word?) with Mirinda Carfrae. I had the pleasure of meeting Rinny a few times that year so I used those excuses to send Dawn funny things (like autographed pictures) or just selfies taunting her. 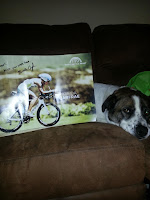 The time had come, we made it to Ironman Florida the following year. Rinny was there so we got our pics together with her.

She got to meet my dogs, another thing we really bonded over (big dogs rule).   She was a 13 hr finisher of Ironman and I was a seconds to midnight finisher, but that didn’t change our friendship. 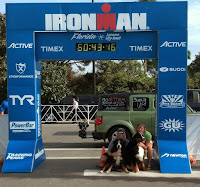 A couple months later I heard from Dawn, she was getting a divorce and moving several hundred miles away.   My heart ached for my friend, but life has a way of throwing you into  situations that you truly need.

In this new location, she met the love of her life.  When I tell you soul mate, I mean soul mate.  There are few couples that I have ever seen that you just KNOW they were made for each other.  Dawn and John are THAT couple. I was SOOO happy for her.   She deserved this.

Then, just a couple months later, she received the most shocking, devastating news.  She was diagnosed with Stage 4 Lung Cancer.  WHAT?   A fit, 13 hour Ironman finisher, non-smoker had LUNG CANCER? And it spread to her back and brain?  How does this happen?

So begins her journey, the chemo, the reality of stage 4 cancer, and unfortunately the STIGMA of Lung Cancer.   If you get nothing else out of this post, please, please, please read about ending the stigma. Lung cancer is not the “smokers cancer.”  (Check out these sites StoptheStigma, StoptheStigma1 and StopTheStigma2 for more some Stigma busting facts). 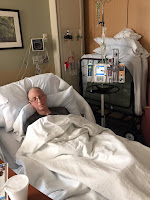 Dawn never smoked, was never around smokers, but poof…here it is.   We have to start changing the stigma on this disease so friends like Dawn do not have to endure the stigma and so that research can actually be done on it!  I will be wearing a special lung that she designed, on my shirt.  It shows all the things that are important to her.   Go Team Dawn! 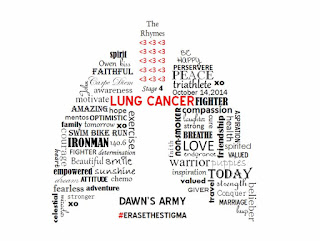 John stayed by her side, and I was inspired by both of them. He is an amazing support to her!  They worked together to figure out treatment. I watched from afar and am so inspired by her spirt. She had just found the love of her life and here this is handed to her.   She continued to fight back so she could swim, bike and run.  And she did it, and I was so proud.  Dawn, however was upset that she wasn’t the ‘same Dawn” that did Ironman.  We had some interesting discussions on ‘pace/time’ and sometimes you have to reevaluate what is acceptable and guess what, sometimes just BEING OUT THERE is a huge win.   Dawn did finsh her triathlon while fighting this disease!  Awesome! 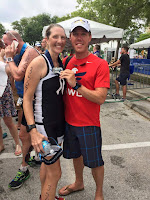 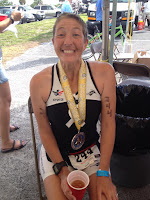 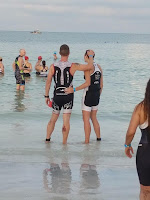 Stage 4 Lung cancer is pretty darn scary. If you read anything, you read about scary stats. Dawn and John were realistic, and often had pretty blunt updates for facebook. (yes you can read about her journey here Lung Cancer: A Triathlete's Journey, in her own words).   They were realistic, but optimistic.

Even through her battle, John proposed to her, and it was beautiful, everything they both deserved.  A few of her wonderful friends organized a beach wedding for them on New Year’s Day.   THEN they streamed it online so we all were able to watch this beautiful moment.   AH perfection!  John even said, We may have weeks, months or years together but any one of those is better than not having her at all. My heart melts at their strength.

Dawn had a pretty scary few months that did take away her athletic activity,  then a new med was put on the market.   It was miraculous and eventually let her to being  active again.  She’s spending every minute of life just ENJOYING and making memories.  They don’t wait until tomorrow to make the memories, they make them TODAY.  As I type this, they are soaking up the sunshine and sand! I couldn’t be happier for them! 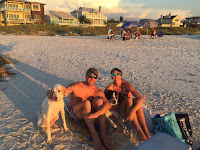 Earlier this year, Dawn found out that I was going to attempt MCM.  John is Retired Army and a huge military supporter.  The Marine Corps Marathon, and the charity I'm running for, Semper Fi Fund are very near and dear to them so they have been behind me from the start.

Dawn knows what a struggle it is for me to attempt this, but she’s encouraged me.  She and John supported me in ways I cannot comprehend to make this entry come true.   In a recent, sobering conversation, Dawn asked me how I was doing.  I told her “there’s only a slim chance I’ll make that bridge.”   She said to me “you know they said I only had a slim chance, right? “..    You are so right Dawn, slim chance.. we still GO FOR IT, GIVE IT OUR ALL, MAKE MEMORIES, and if we get to the finish line, it was meant to be!

I hope I do her proud next Sunday.  Every step will be a step for Dawn, it will be pushing and giving my all, I will be making memories,  and I will succeed by even getting to that start line in her name!

Dawn, this is for you!