Oh where to start with this one!

I did Cman last year, and loved it.  I signed up for this year a primer for Ironman Florida. I was to do the aquabike: 2.4 mile swim and 112 mile bike. Followed by a training run of 12 miles.

WELL.. life had a different plan for me.

We arrived in Cambridge MD on Friday AM, headed straight to the packet pickup that was to open at 10.  I had my day planned out, I would pick up the packet at 10, go straight to T1, do a quick ride then rack my bike.  Well, I need to learn to read the Athlete guide because you couldn't rack your bike until 2PM.  I guess that's what I get for 'assuming' I knew what to do since I did it last year.

So alternate plan, we would take the RV over to the High School and get set up, I would go for a ride, that would end at T1. From there I would rack my bike and hitch a ride back with someone. FAIL #2 of the day!.. You couldn't really set up until SCHOOL was out.

We headed to the Great Marsh Park in the RV to wait out the afternoon.   I decided that since I had some time now, I would go for a swim.  The water LOOKED perfect.

I got in and swam 10 min out 10 min back, and was stung about 5x by the Jellyfish.  They call them sea netties in MD.    It wasn't that bad, just annoying.  I decided I would lather up with aquaphor on race day.  I went for a quick 30 min ride, racked my bike and went to the High School.

The evening was uneventful, the camping was rather peaceful and not as many RVs as Eagleman. I had a nice early bedtime.

Race AM:  On the bus at 4:45AM.  The worst thing about late season races is how long it takes the sun to get up.   Although when it did make an appearance, it was beautiful.

Race prep was non-eventful for me, that is good.  I was trying some new fuel options, since this was a training race.  I added some salt potatoes to my bike and I added a new bento box between my areo bars to just 'pick' at peanut butter stuffed pretzels and Swedish fish.

I was getting ready, slathering myself with aquaphor and I saw this panicked woman who left her wetsuit back at the hotel.   Talk about having a plan B!  I offered her some aquaphor if she needed it, but we were all hopeful that someone would have an extra wetsuit..well SOMEONE DID.  You have to love the tri-community. I swear some might even bring an extra bike.

I was prepared, ready for today.. SO I THOUGHT!

Lap 1 of the swim was fine, lots of arms and legs, and the normal bump and whack.  There didn't seem to be much current on the way out.  Coming back I was sighting on the buoys and TOTALLY thought the 2nd to last buoy was the turn buoy, only to get there and realize there was another 100 yards. Headed back for loop 2, there was a pretty swift current to face, luckily it was short.

I then turned and faced the jellyfish from HELL!  I felt my first sting in my armpit.  Then I grabbed one on a down stroke, yuck.   Then I meet up with this total jerk. He was a 15 foot zigzagger.  15 feet to the left, then 15 feet to the right.  I tried to sprint to get in front of him, or just slow down and let him go. I tried to go outside, then inside. I could NOT get away from him.  He had one of the wetsuits with the rough elbows, so every time he'd hit me it would scratch me!  I got to a point where I was contemplating how I could hurt him. For a moment I thought of just taking his goggles.

So as I was fighting him, I kept getting stung.  One wrapped itself round my garmin and May-poled itself down my arm.  I thought I'd flick it off, but that didn't work. I had to stop and detangle the thing from me and in the process it stung my fingers!  This happened 3 or 4 more times and once on my FOOT!

As I turned on the far turn, I contemplated quitting. I have NEVER, EVER thought of quitting a race.. but I did today.  I then thought about the medal and my nails, how stupid right? but that dumb thing kept me going.

I FINALLY ended the swim and was beyond pissed.  I was SO slow, 1:55.  My first thought was CRAP I can't afford that much extra time on the swim in Florida.

I was just inspecting my arms as I got out, thinking "really? just REALLY?"

I huffed over to the change tent. I had fully expected a quick T1, because I wasn't changing. All I had to do was remove wetsuit, put on shirt, and lube.  I noticed I cut my toe and it was bleeding ..awesome.  I just stood there for a min just looking dumbfounded, then proceeded out of the tent.

How's this  for the most defeated, pissed off face?

From there I was ready for the bike... or so I thought.

I followed my nutrition plan, first street out I ate my Uncrustable. Then I knew I had to tend to the stings. I had biofreeze with me and I figured the menthol would alleviate some of the sting.  It worked, a little.  I had one on my foot that I couldn't get to and I wasn't about to take my shoe off (OR STOP).  About ever 15 min it would feel like someone would electrocute my foot.  The exposed ones on my arms would just sting as the wind hit it. The ones under my shirt, like my armpit didn't bother me as much.

I knew I was in for it with the wind, but I never expected what actually happened.  I need to learn how to read the 'wind' forecasts.  I had planned on the 16 MPH S as coming FROM the south not BLOWING  south.  So when I mentally prepared, I figured I would have about 30 miles of headwind, 60-70 of tail and 10-20 of cross wind. It was exactly opposite!  The first finger of the ride was fine, little bit of wind but nothing to worry about. Once you turned into the Wildlife refuge it was like someone smacked you with a brick wall.  My 18 MPH became 14.  Every time I saw the road turn I would think "oh finally", only to have the winds blow HARDER.  The winds ended up being sustained around 15-17 and gusts to 25+.

The cross wind is REALLY hard for my bike. It is quite aero, but that means in a cross wind I have to hang on for dear life.  I HAVE been blown over before, I don't wish to do that again.

I put my head down and pedaled, and swore, and pedaled, and swore.  I actually took the time to switch my garmin to show the heading in one of the views, that way I could see which direction this damn wind was going.  Turns out, the only time we had a tail wind was when we were headed DUE NORTH... NNW was 'eh' but North was a nice downhill!

The last 15 miles of the loop were N, HOWEVER, the first 4 of those miles we're treated to this terrible road. It feels like you're using a 1950's weight loss 'shaker.'  Add insult to injury, the town decided they should cut up the road 5 days before the race!  So there were (4) 15 foot sections of sinking gravel/sand that you had to cross.  So much for using that tailwind!

The race director said that the town did that like 5 days before the race! How nice, thank you town!

Anyway the last 12 or so miles were pretty fun. I was going double my speed from the last 50 miles!  This is a picture from last year, but you get the idea.

I stopped at 2 port-o-potties along the first loop.  The 2nd one I almost killed myself. First I noticed a friend's PMC waterbottle. I looked up and saw him, he was sad because his cage broke and he was going to have to abandon it.  In case you missed my PMC posts, it is something you cherish and you WANT your waterbottles!  Anyway I told him I'd take it, I didn't have anything in my rear cage.

I step into the potty, and my foot slips. I half grab the door which swings open, then I looked for another place to put my other arm.  In those 3 seconds I thought of what would be the best way to fall and not hurt anything.. then all I could think of was falling IN..  It was close, but I didn't fall in... I did laugh, and swear some more.

When I came into the first loop, I saw John and threw the PMC bottle at him.   It was safely returned to Rick - YEA one win for today!

I was ready to quit by loop one and thought, no way, I have to finish. But about there I decided I  was not going to do my training run. I had talked about it, and I knew I should do it, but I just wasn't having it. My body was toast, and my hip still wasn't great from the weekend before.  I also knew I was 3mph slower than last year so there was no hope of me winning Athena again.

Head down and pedal and swear..that was the motto.  I kept singing this, except the words were "every day I'm SUFFERING..SUFFERING"

I continued with my nutrition and hydration plan, but at some point I just didn't feel like eating or drinking.  I just wanted OFF the bike. I managed to bring it in in 7:35, my goal was 7 hrs.  I felt so defeated.  I wasn't doing my run, I didn't make EITHER of my times.  Before anyone replies, I HAVE To do my swim in 1:45 and my bike in 7 or under to make the run for Florida. It is ALL about the time.  Although I think this crap is preparing me for the worst, only to give me the BEST conditions ever for race day!

So anyway, I get off the bike and they have a new finish line for Aquabike (YEA!!!).  You run into the track just like any of the runners and pass UNDER the real finish line. I was so excited to see a finish line and hear my name.. ONLY to see the finish line.. the damn wind had blown it to pieces!

Hey but the Race director put my medal on!

I was so done.  I was itchy, hot, cold, salty, sweaty, and very, very irritated.

I went and had a massage, NO LINE WOOHOO.  Then I hear a friend's name as the woman's first place finisher. (She better tell people soon so I can mention it).

OK that was cool.

The woman with the lost wetsuit also found me to thank me for talking her off the ledge, so sweet of her. I'm glad SHE had a good race.

Then I look at the results. I shouldn't have even looked at them. I was 2nd place Athena.  Which, I would be happy with in normal circumstances. HOWEVER, I was 38 min slower than last year.. had I reached my goals today, I would have taken first. She only beat me by 5 minutes.  So then comes the over analyzing. Where could I have made up 5 min?
Not looking for a pity party, yea I had a REALLY hard day. Days like today make you tough, they make you realize what you CAN get through. I'm very glad that wasn't my first race here or I would never do it again. 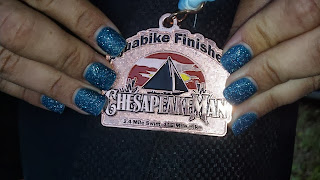 Check out my facebook page for more updates
Posted by Laura at 6:24 PM