End The Season with some BLING!

It has been a VERY ROUGH season!  I haven't written that much because it has mostly been negative and I didn't want to bring down the blog!  From my mom's accident to my just absolutely miserable season with my EDS, but let me tell you - yesterday was the way to go out and go out strong! NOT TO MENTION get me all fired up again!

About 2 months ago, Lisa and I started asking Julie (in white) if we would be doing the SheRox Triathlon.  It's VERY late in the season and can be pretty chilly.  Most of us are pretty burnt out by this time, but I am so compelled to do any race that's on Webster lake because I live so close!  I secured a coupon so I started the peer pressure!  We were all swim buddies on Sept 11 and that did us all in; Lisa said "lets do a relay" - so we all said "ok fine."
Truth be told, I hadn't been in the water to swim any distance in about 6 months - and I now had 2 weeks to be ready to race! YIKES!  I immediately renewed my YMCA membership and jumped in the water.  My first swim was NOT what I had hoped!  My time was "ok", but my shoulder was TERRIBLE (see the post New way to Adjust your Shoulder).  It felt like every stroke someone was stabbing me in the back with a knife - AWESOME!  How was I going to do a relay in 2 weeks!?!.
No way I was telling Julie and Lisa!  So the next day I went to the Chiropractor (my deity on Earth).  I saw him about 7x in the next 14 days.  I also saw my Massage Therapist about 5x !  I could not LIVE without those two!  By the time they were done beating the crap out of me, my swim time was 'ok' and the knife was  gone.
Onto SATURDAY - my diveshop was going out of business and had the last sale, I can't tell you how sad this is, but point for here is that I purchased some additional wetsuits.  Not that I didn't have enough already. (Stay tuned to the Facebook Fatgirl site, I will post a pic there of my wetsuit closet, there are over 25 in there).  The really exciting thing is I got a GREAT deal on one tri-wetsuit for my friend Ericka!

She's so stinking fast in the water anyway, now look out! She's going to win some races! Ericka and I went for a little "TEST DRIVE" of her new wetsuit on Sat, as you should NEVER try something on Race day.
We noted that they moved transition to a full quarter of a mile AWAY FROM THE BEACH.  That's all I could think about!  Man!  I hate running, and I was sooo excited of doing a RELAY, I could swim and that's it.. but NOOOO they created a quadatholon for us.  1/4 mile of running BAREFOOT through the crappy parking lot -YEA!  I can't tell you the last time I ran anywhere! - Ok, I'll do it though, right? (I'd hate to see me if I got caught up in the wrong crowd, all this damn peer pressure).
So Sunday rolls around, I had planned on riding my bike over to the race but I neglected to plan for the SUN.  No sun until well after 6:30.. so I had to drive.. boo!  I drove over, and subsequently was eaten alive by mosquitoes in the dark!  Late season tri's do have some extra considerations, that's for sure!
I met up with Julie and Lisa, we racked our stuff and sized up the competition.  There were some TINY runners, and some BIG mountain bikes. We thought 'eh ok.'

When it came time for the swim wave, I'm normally REALLY freaked out by being in the last wave, because I would then be THE LAST ATHLETE.. not today!  I knew I would go all out, and I knew I had Julie to bike and Lisa to run!

The course was a triangle, and the last leg of the swim shown here was the longest.  I'm guessing this part was about 1/4 mile (of the 1/2 mile course). I looked behind me and most of my wave (yellow) was there!  I only saw a couple in front of me, which was a first!  Then I saw a bunch blue and green caps FRONT of me so I knew I had to gun it.  They took off 3-6 min ahead of me so I had some hope! SPRINT SPRINT SPRINT!

Lisa snapped this shot of me coming out of the water.  Man I was out of breath.  I've never "sprinted' in a tri, usually you go 'your pace' so you have energy for the REST of the race.  Then I remembered the RUN.  I was happy to see Lisa there to run with me to the Transition area.  I walked for a very short bit to catch my breath, then  I ran, and yes I RAN.. the whole way.  Those who know me know how crazy that is.. but I wasn't letting my team down!  And in hindsight, holy crap 14 seconds is all that separated first and second place!
I ran into transition, Julie took the timing chip and off she went.

I wasn't that fast on the swim, I was in the middle of the 'relay' people.  But I'm pretty happy with my swim. Julie on the other hand ROCKED that bike, she was 2nd in the bike!  GO JULIE!   While Julie was out on the bike, Lisa and I looked around, we didn't see any other bikes back yet.  We figured we might have a chance at first place, but we weren't sure.  Then we saw one team come in.. YIKES.. they were just a tiny bit a head of us!

Now it was Lisa's turn, who by the way has a sore heel from marathon training!  I don't know how she did what she did with a sore foot!  The sisters passed off the timing chip and off went the Rocket Lisa!

Lisa ran her 5K in 24 minutes.. I've been known to run a MILE, maybe two in that time.. She was 2nd in the run.  Wow Lisa, just wow! She crossed the finish line and the first thing out of her mouth is "I CAUGHT HER AND PASSED HER."   - Julie said "what?" - so we had to explain.

Then we waited...
and waited...
and waited...
I can honestly say I've never been around to "wait" for anything, I'm always the one people are WAITING FOR!  Eventually they brought out the individual results.. relays weren't on there.. UGH... so I went in the trailer.  I heard some Elites and some other athletes somewhat bitching "well I could be near the top but, blah blah" - no real excitement, just a matter of fact.
Then the woman actually handed us the paper rather than putting it on the board.  It was like when the 7 year olds went to the next level on "Americas Got Talent" we just screamed.. we won by 14 seconds.. yup 14 seconds.
I'm so proud to be a part  of Team LL cool J.
Thanks Lisa & Julie for making my season! 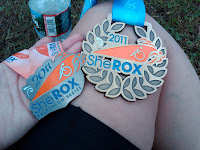