I had my first race of the season on Sunday.  It was not all I had hoped!  (Are they ever?).   Had my friends, trisherpa John, and it was even a nice day for a change.  But I should have known I was doomed when I ripped  a nail off to start the day! 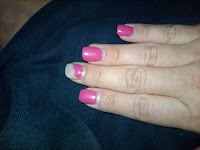 We've had a BRUTAL winter, and the water never had a chance to warm up.  Although 58 degrees is much better than I hoped.  I had my skull cap, booties compliments of a friend, and a pretty cool heat pack thanks to my diving experience.  The water wasn't as bad I as I thought.  Everyone was freaking out, face freezing, etc.  I know better, I know that if you put your face in and just go, the burn goes away after about 15 seconds.  The hardest part about cold water races is losing your breath.  (See  Cohasset Tri blog post).

It was a deep water start and I didn't have time to get out to the far right like I usually do, so I just started on the inside.  BAD IDEA!  Normally I like to start front outside, so I can let people pass me and I can catch a draft.  Well, stupidly I started swimming, then swam up near someone's foot and caught her heel square in my NOSE!  John happened to catch the damn thing on camera!  I'm going to blame my pathetic swim time on this!  I told my mother I got kicked in the nose, she asked me if it was on the run !?!?!

So, swim over,  into the transition I go, no problem!    The booties were tough to get off but worth it, as my FEET were WARM! Nothing like last year!   I decided to just wear my shorts and put on a t shirt instead of my packed long pants and long shirt.  (I packed my transition bag for a long weekend)!  I also had to pee!  I decided against it, surly I could hold it!  Off I went.

For some reason the bike seemed to take FOREVER, I looked down at my odometer and I had gone 4 miles -- FOUR MEASLY MILES!  What the hell!?  I felt like someone put molasses on my tires!  I had this really cool fast bike and I'm going like Grandma (actually I think Grandma just passed me).

Also, I had made a mistake that I JUST WROTE about!  Never try anything new on race day.  I purchased a speed fill water bottle.  Of course being 5 feet tall and having the tiniest bike, the new bottle didn't fit with the standard holes, so we had to improvise putting it on my bike!  I never took it for a ride before the race, and needless to say, every time I hit even the slightest bump, it would make a big racket!   ANNOYING!!!!

Ugh, so I turn the final corner and see the last hill to the finish.  Turn in and I just KNOW I'm one of the last bikes in.  Oh well, what else is new?

I did a quick shoe switcharoo, decided not to eat any Gu, and decided I better Pee.  We were just discussing the Active.com article about 6 grossest things about at triathlons  and I wasn't about to do that.. so I hit the portapotty.  John was so confused that I ran past the "Run Out" - he thought it was so funny to take a pic of me going in.

I did end up Running 'most' of it.  I ran (by my standards) to the first water stop and had to STOP.  Here I realized I FORGOT TO PUT MY RACE NUMBER ON!  Duh!  How many races have I DONE?? oh well, I have it written in perm marker all over my body.  And I forgot to put body glide on my timing chip on my ankle so I was starting to chafe.  Lovely, I was going to get a blister.  I had to stop to switch ankles.  I walked for about .1 mile then started to "run" again.  I'm so slow it's pathetic but I got the job done.  I was really almost the end of the  pack. People were leaving (so what else is new).

The last .4 miles or so is pretty, you run over this viaduct and over this tiny 1 person bridge.  I totally body checked this jerk.  I was OBVIOUSLY still running, this guy was moseying over the bridge with his chair and other spectator gear (in jeans) toward me.  I yelled out "I AM STILL RACING" to which he mumbled something and did not move, I wasn't sure what on earth he said, so I just body checked him out of my way.  He's lucky it wasn't 2 feet further down the bridge or his @ss would have been in the water.

The rest of the .4 was very positive, people are very encouraging (especially of the people at the end of the pack).  I think John was surprised to see me 'early.' Yup, I said early! My run was faster than normal!  I crossed the finish line, got my water and met up with my friends!  WOOHOO! One of which WON the newbie category.  She finished the race in 1:14 or something like that!

After standing there for a few minutes though, I had to go "relieve" myself behind a building.  Seriously?? that's the 2nd time that's happened too!  My friend Rick says that its "stressed stomach" - I ate exactly the same thing that I always eat, and I always work out at the crack of dawn.  Apparently you can get stressed stomach by working 'really hard.'  UGH!  yet another thing to overcome!

I have no idea how I'm going to get through a Half Ironman in 7 weeks if I can't get through a sprint without puking!   I feel like I have no business doing it!  I've had the most positive attitude about this, and take most things with humor and 'can do'; I also take this EDS crap with a grain of salt.   It wasn't until Sunday that I actually considered it a disability!   I've only had a label on it for about 8 months, but I've considered it a road block not a disability.   Kind of like a giant pot hole in the street.  I can go around it, sometimes I get stuck in it, sometimes I may lose a tire, but eh, it's just there.  Sunday  made me stop and take another look, can I do this?   I know you all will just tell me yes you can, but as more things on me fall out of place, (like Sunday my ankle just decided to turn left when I wanted it to turn right), I'm may have to re-evaluate this!

I know I will start it, but if I get to the finish line on foot, that's another story.- I will have a party that's for sure!
Posted by Laura at 3:57 PM