5 years in the making, and today is the day.  I woke up, saw that the ocean had not calmed down that much. I just shrugged, what can you do? just go try!

I went to put my hydration and last bit of nutrition on my bike only to notice the untrued wheel!  Ugh, saw the mechanic twice and I had unintentionally turned my bike upside down and dumped out my pretzels and Swedish fish. - Oh well, I did have more in special needs.  The mechanic was able to release my brakes enough for me to ride.   I ventured back to my room and suddenly it was time to get our butts over to the start!

Kellie and I walked to the other end of the beach and left Melissa and John behind to venture "under the arch."

Florida was one of the new swim start corrals.  I think it was pretty cool, I would have gone far outside anyway, but this way I was with people my own speed.  The downfall of swimming with people your own speed, if you have a crazy person next to you, you can't get away. I really can't get enough of the swim pictures! 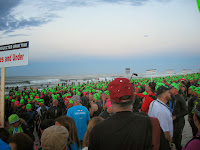 We heard the pros go off, then a handful of us from Team Bazinga were hanging together, had one last group hug and it was time to get in the water.  The cannon went off and I can't even describe the excitement of entering the water with 2800 people.  We all were tackling the surf, diving down, jumping over and as we passed the breakers, everyone would yell "weeeeee" as they jumped over some waves.  You couldn't actually 'swim' for about 100 yards, after that, you could - sort of.

Swimming like a pack of sardines was interesting. I am not afraid or anxious of the water. I am also a 'defensive' swimmer.   Always have an arm out front, and this protects your head a little. I did have a guy elbow me square on the top of my head.  You get bumped, punched, and the thing that really got me was people who would grab you and pull you back like they were using you as a spring board.  If someone did that to me, I just did it back, it was kinda fun.  I loved the look when they would grab me, yank me, and be all offended when I returned the leap frog!  I had more 'free swim' than I actually thought I would.   The draft is just amazing. Before I knew it I was rounding that first turn buoy!  As I turned the buoy, I took a breath left and saw WAYNE, he saw me, we both yelled "Laura? Wayne?" was pretty funny in that sea of arms and legs, where we ALL look the same, we see each other.  It made me smile.

I looked at my watch and saw I was pacing just ahead of where I wanted.. AWESOME.  I hit the beach and looked for my crew, I could not find anyone so I ran up the beach, grabbed a quick water and back in for round two.

Before I knew it, the swim was done.  I really had a great swim, loved every minute of it, even the crazy people.  I especially got a kick out of the swearing I heard "DUDE, WTF" about 300x.  An Ironman swim is not for the faint of heart!  I am so glad I'm a fish.

Next we ran up the beach to the wetsuit strippers, I really didn't want to sit in the sand but did anyway and it was off in 2 seconds. I hit the showers and HAD To get the sand off my butt. I was trying and a volunteer was yelling at me to move.. haha not until sand off my butt.   I ran RIGHT past my room and my entire family to transition.  For some reason they were not handing bags TO the athletes when I was there, I yelled my # and they just told me which row to run up. Ok, no problem. 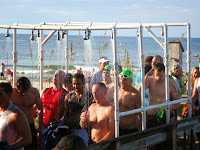 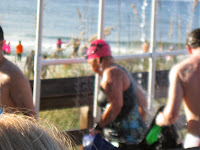 I got into the change tent and was in and out in no time. 112 miles of cycling, here we come!  I decided to wear my Phils Phriends team jersey from the PMC.  I ride in the Pan Mass Challenge, 192 mile bike ride across MA. This year we raised $39 MILLION all going to the Dana Farber Cancer Institute - 100% of the rider donations .. 100%!  Anyway I wanted to carry all of those fighting or who have lost their battles with Cancer with me on my Ironman.  The motto on the shirt is "Be realistic, plan for a Miracle" - it seemed appropriate!

There was about a 10mph headwind for most of the course.  That was pretty normal for most of my training so it wasn't 'that' bad. Of course everyone wants a tailwind but I was trained for this.  I venture to guess it was about 80 miles of head or crosswind and 30 of tail.  The bike was pretty uneventful for me.  In the beginning there was ZERO way to not draft.  If you would leave room between you and the guy in front, someone would jump in that spot.  It was also pretty difficult to pass for the first 30 or so miles because of the thousands of bikes! 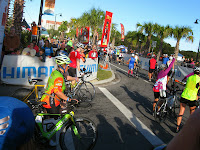 A very cool thing for me was the passing. I never pass anyone, and I passed more people on the bike than I ever have in any race.   I saw I was pacing just fine, I never tried to catch anyone, just went with my plan.  I went with perceived exertion only, I managed my MPH, but really I knew I had to keep the "exertion" at a certain level to maintain myself for 17 hours.   I did have some knee inflammation, no idea why, but it wasn't unbearable, and it went away the next day. Other than that my body had been super cooperative so far!

The Special needs road is a mess.  If you read any race report on it, you will hear horror stories.  Someone mentioned that it looked like a bike shop. It certainly did!  Entire rear cages, xlabs, bottles, co2, tubes, tires, it was crazy.  The road itself was like a bike path with lots of tree roots. I rode enough of those in my training for it not to bother me. I just slowed down and took that section about 12mph, why risk it?  I saw a few accidents, and had a few close calls. There were some crazy people out there, especially the ones who don't call out 'on your left' then come within inches of you.

I stopped once on the bike to pee, no I won't go on my bike!  I did train for this too!  I was in and out of the portopotty in about 20 seconds.  The guy doing the piddle dance next to me actually said "HOLY SH!T!" when I came back out that fast :).

The ride back was fun, I didn't anticipate the hills though.  I looked at the maps and it looked flat (compared  to New England anyway). For those local folks, it's like the Patriot course in MA.  Flat, but not flat. No biggie, I HATE hills but this was doable.  I killed it in a few areas though, I was over 25mph for a bit with a nice downhill and tailwind. Yup I had fun on that part.  **Btw if you want a legitimately FLAT course, Eagleman or Chesapeakeman is FLAT FLAT FLAT**

As I turned onto beach road, I saw I was going to come in around 7 hours. At that point I knew I would be an Ironman that day. I had so many unknowns with my body and with my BIKE (thank you Ironman for breaking my wheel). I knew I would have almost 8 hours to move my legs 26.2 miles. I knew I had it!  The last 5 or 6 miles down beach road was a nice tailwind, and knowing I was going to make it was pure joy.

As I was approaching dismount I saw John and Melissa.  WHOOHOO.. it is SO awesome to have support at races, seriously awesome.  I dismounted, handed my bike to a volunteer and actually remembered to grab my meds and my garmin (I was terrified that I would forget that).