Friday came so fast!  My family had arrived and I had a few last minute items to take care of... .like organizing my gear bags, racking my bike, etc.  I also had to go visit my A.R.T. friend  JOE.  He hooked me up again, but my sacrum wouldn't budge so he told me to come back at noon, just before they close.

There was an insane storm brewing.  25mph winds, heavy rain, and double red flags on the beach. Thank God the race wasn't on Friday!   I knew that the front would pass and a North wind would calm the ocean for Saturday so I wasn't really worried.  There were several, IMO, idiots who were attempting to swim anyway.  I mean, why on earth would you go into a "DO NOT SWIM, DANGER, RIPTIDE" water the day before your big race?  You gain nothing by swimming the day before anyway.  The energy it would require to get through those breakers was not worth it, plus, major riptide warnings!  I just watched from shore and hoped no one drowned.

Kellie and I with the RED flag. It eventually went to double red (meaning NO SWIMMING).

I double bagged all my gear, because you had to leave your bags in the parking lot, in this monsoon.  I had 2 gallon ziplocks inside my gear bags. Sure it would take an extra 10 seconds in transition, but was worth it to have DRY stuff!

I headed off to rack my bike, of course there is always a rule that you must rack by the seat.  My bike is so small 49cm, so if I hang it by the seat it dangles 3" off the ground. It's rather dangerous on a normal day, but with 25mph winds it was insane to leave my bike banging into the others.

I hung it by the handlebars then went to find an official.  I found one who told me that "once they're all on the rack, they wont swing" and that "he would watch mine for me."  The person next to me never racked their bike so mine had a full 2 feet to swing back  and fourth!  **Note when I arrived on Saturday AM, they had switched my bike, un-trued my race wheel and screwed up my brakes.  Thanks Ironman you SUCK!  I even talked to the RD and he basically said "so what, that's the rule." Hm, really? how about you keep my gear safe, you would never do that to those damn Princes or the Pros.. so why the rest of us? I think you have a DUTY to keep our gear safe, especially when you have a KNOWN risk.   Not sure if my wheel can be fixed, I guess I'm just out $1K.  Bleh!

I did find Joe in the A.R.T. tent again and he was able to put humpty dumpty back together again! WOOHOO.  I felt pretty darn good!

As I was leaving, I ran into Joe Stone and crew.  I helped check in his killer wheels, by this time there was a HUGE line and we had to wonder to the back. This gave me some time to hang out with Joe. Really, I'll say it again, check out his story!  www.ironmansjourney.com  He is amazing. 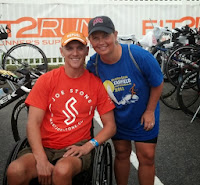 Joe is an advocate for getting others out there and active, regardless of their limitations.  I feel the same way with overweight AND with Ehlers Danlos folks.  He inspired me to be a little more open about my EDS.  In the past I felt I was complaining if I mentioned it too much, but I learned this weekend that I can help others by just showing they aren't alone.

On Friday the Ehlers Danlos National Foundation also posted a link about me and I started to get some amazing support from my fellow EDSers.  I was partially glued to my phone looking at the comments on my facebook page for fatgirl.  SO many comments, I felt I had a thousand people to do this for! The feeling was pretty surreal.

After the bike racking, I headed back to my room to hang with my family. So happy to have my husband John, parents, brother and 2 cousins come to cheer me on.

I didn't go out to eat, my pre-race meal is a Shrimp Alfredo from a restaurant in Massachusetts.  I ate half of it and froze it before we left.  It seems like a heavy meal, but I ate it once and it worked, so I continue to eat it before every race, even if I have to transport it 1400 miles!

After dinner we just hung out and everyone left pretty early.

I turned my facebook page over to 3 awesome admins: Kelly, Rebekah and Naomi.  *Wow, they did an awesome job!   *

I tried to go to sleep.  Yea right. No one sleeps the night before an Ironman.