I decided a couple months ago that I was going go to Florida to volunteer.  You really need to be there the year before if you want a slot for next year. As a volunteer you get the privilege of standing in a 3 hour line in hopes to get a slot.  I'm glad I did this, as the online slots sold out in less than a minute! 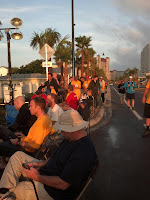 I arrived on Friday and drove in from Tallahassee.  My hotel was NOT within walking distance so I had to drive to the race site.  Parking is terrible, you park at a Walmart a mile away, or down the street, a little under a mile.  I found that LaVela was the best place, it was slightly closer even though it charged to park.

I went to find a volunteer registration tent only to find out that there was a meeting at 5PM (??), I received  no emails or communications to me about meetings, so I was a bit frustrated.  I wasn't sure where I was going, what I was doing, but I'm a Type A and was bound to find my post. It was just before 5 EST when I discovered that Panama City is on CENTRAL TIME!   Seriously  who put half of Florida in Central Time?  I felt stupid!  The 5PM meeting was also not helpful for me, the Security and Swim captains did not show, so I was still at a loss.  The Volunteer Coordinator told me to just go to my posts in the AM and I would be fine.

Well, not only was I fine, I had the absolute best posts on the course!  There were 2500 volunteers and I think I had the best posts!

I arrived race day at 4:30am.  Met up with some people who I thought were in charge.  Turns out I met the Sheriff's department and they stationed me with the EMT's.  It was my job to get DNF's and injured athletes out of the surf as they were brought in on the Jet Skis.

The water was pretty choppy.  Many, including the pros said it was the roughest water they'd seen in the 14 year history of the race.  I watched as the Jetskis and Kayakers had  a tough time maneuvering.

The mass start was crazy, I was at the other end so I didn't capture great pictures, however you can see there are 5+ people in spots where there should be one.  Many were hurt during the start. Including one man who was kicked so hard he dislocated his shoulder. I asked an athlete later and he said there was no way to NOT climb on people.  I was also told this was more viscous than any IM they'd done before.  Presumably due to the waves.

I saw most of the pros come in for the first lap prior to to getting to work. A tip I learned, all the Pros "SKIPPED" out of the water, definitely made the trudging through surf look easier than the mess I saw with the age groupers.

After the first loop of the pros, I put my camera away and went to work. I had a wetsuit on so I stood in the waves.  I helped people off the Jetskis, but also kept an eye on people falling over in the surf.  I saw the weirdest stuff once the age groupers came through.  One guy had a skull cap on to keep his head warm, not odd.. but couple that with the fact he was in a SPEEDO ONLY: Weird.  Seriously if you're cold, WEAR A WETSUIT.   Another guy had a zipper, over the head wetsuit shirt on, he tried to remove it in the surf and of course got it stuck on top of his head, arms extended and landed face first into the surf.  I yanked his head out of the water and he said "hey I'm ok." - Seriously, don't put your head in the waves as your arms are tied down.

As we got closer to the cutoff, things got  hairy.  MANY MANY people were throwing up.  I had never considered that I would have to swim through puke on an IM swim.  The last swimmer that would make the cutoff stood up, her eyes were almost rolled back into her head.  I ran to her and she said "I'm not going to finish."One other volunteer and I just yelled, how about you make that decision in 20 yards, you have 1 minute to get there and we ran her up. She at least finished the swim!  The look on the faces of those behind her were devastating.   Knowing their day was over at 9:30 AM just heartbreaking.

I was the only volunteer in the actual water on my side.  As the end drew near, a few joined me and also wished they had brought a wetsuit. (note, bring a wetsuit if you're volunteering, you might want to swim at some point)!

I collected so much junk as I was standing there, several goggles, caps, gu packets, all would be 'trash.'  I don't know if the athletes retrieved their stuff, but know to check lost and found. People turn in just about anything.

I then took a break to remove my wet clothes and eat and watch the pros come in on the bike. This was the end of Andrew Starykowicz's epic ride. 112 miles in 4:04!  I didn't make the connection until later in the day, but he was the athlete in Abu Dhabi who hit a volunteer that ran out in front of him an was subsequently thrown in jail. (Check out his blog).  He didn't receive medical care for his injuries and had a pretty hellish month.  I swear this story could be on that "locked up abroad" show!  He really just let it all out today!

Note he has a police escort! YEA, so I will consider myself first place from now on when I have one, instead of last!

After watching him finish, I proceeded to the most awesome post, the finish line, where I stayed for the next 11 hours. I was un-wrapping medals, and handing them out!  WOW!  This is what life looked like for the rest of the day!

I was lucky enough to be there for Pros, and take some pretty cool pictures.   Their interviews were very humbling too, they were genuinely happy, proud, they let it all out there.  Andrew especially was touched, especially after the year he's had.

Yvonne was similar happy, no smug athletes here!  That was nice. Actually, I only encountered a couple of jerks all day. Most  athletes were just so awesome!

My Idol Rinny! And  a great pic of the top women. Yvonne, Mirinda, and Meredith. I was in awe of Meredith as she came out of the water 11th overall. Yea she caught almost all of the pro MEN, who had a 5 min headstart!

Then as the day wore on, there were the age groupers.  The emotion on their faces is just awesome. People were letting it ALL out on the course.  Many  would collapse as soon as they got to the finish line. It was an absolute honor to put medals on these athletes heads!

Ironman had a special event this race. It's 500,000's finisher crossed the line at 14 hours.  This poor guy had no idea what was going on, why there were fireworks for him, or the women's winner was putting his medal on!

A finisher in the last 30 min was especially  amazing. Not only did she complete an Ironman, but RAN IN HER FULL FIRE GEAR!  WOW! 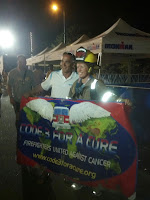 We drew closer to the end, the pros were all out either running people in, or giving medals.

Inspiring is an understatement.  You can't help but be inspired, in awe, touched, and just downright emotional when you watch the last hour.  TO hear the chant from the crowd "You are an Ironman" was amazing.

Well watch for yourself! I took this video!


I cannot wait until next year.  359 days until I cross that finish line.  If you need an excuse to go to Florida  this sure is a good one!  Fatgirl is now officially on her Ironman Journey!