I had 12 miles on my training schedule for Sunday.  I like a race atmosphere so I am basically 'forced' to do the whole thing and I have water support along the way.  I searched for a half marathon in the area for June 17.  The ONLY one was a trail run.  I've never done a trail run, but thought, hey why not try?

I emailed my coaches, they both said "cool, go for it." So I sent out my note and two of my crazy friends said "yea sure, why not?"  So, on to the Mt Greylock Half Marathon we went!

We arrived early, actually Ericka and I were the first ones there so we had a killer parking spot.  I had been reading about the race, many people were saying "wow, hard" or "this is NOT for a first time trail run, as a matter of fact, it's pretty hard for a Half Marathon." - I should have known.  BUT, I have never backed down from anything.  I can do whatever, just takes me longer :).

I knew we had a 2200 ft climb in the first 3.2 miles. I figured we would walk that, whatever right? To give yo an idea of how high that is: if you are one of my Pittsburgh friends, the highest point at Seven Springs Ski resort is 2994, the base is 2240 - a drop (or climb) of 754 feet.  This was THREE TIMES Seven Springs.

For those that live in MA, Wachusett has a  945 ft vertical descent. Sunday River in ME has a 1758 ft descent.   None of these are close to Mt Greylock, Which is the highest peak in Massachusetts at 3491 ft

Not many people do this race, they consider it 'intimate' - or if you are smart enough, 'intimidating.'  Apparently I'm not smart enough. 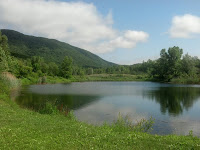 If we had one thing here, BEAUTY!  It took us 2.5 hrs to get there, as it's in the Northwest corner of Massachusetts, almost Vermont. This pic is where the race started.

We looked up and saw nothing but fog when we first got here, but as race time approached we saw the tower.  Yup, we're going to the tower, that tiny blip at the top of that peak!  YIKES!

There were actually two races, a 5K and a half marathon, both were longer than normal too.  The half was 13.5 miles, 5K was 3.5.  For the start, everyone collected about where that guy is in the pic, and see that flag? about 200 people funneled into that hole between the trees. 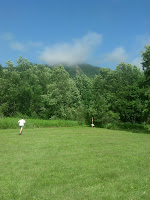 We didn't care, and stayed to the back. I'm sure that many who were 'running' did not like that bottle neck.  As soon as you got into the trail it was single file. Then immediately the incline started.  It was hard, rocks, mud, tree roots and in many (I'd say most) of it the trail was about 12" wide.  It was shady, that was nice.  We climbed for 3.5 miles.  We saw a road and assumed that was the top, nope cross the road and keep going UP UP UP. The view was breathtaking here and we weren't at the summit yet!

It was very hard to get a picture of the incline, this sort of gets you an idea. This section was actually pretty nice, larger path, not as many rocks/boulders!

Then came the top.  Amazing!  You can see 3 states from here.  We saw the tower, but I didn't know the significance until the next day.  It is a war memorial at the highest peak in MA.  Pretty cool, I'll probably DRIVE up there again someday!

We made it!  5K straight up!  I'd think about doing that part again again, but the hell was yet to come!

We got to the other side and saw the descent.  We had 10 more miles of DOWN.   I can't explain how painful DOWN is.  When we first saw this, we all thought 'yea tough climb.'  I never even considered how awful the downhill would be!  It is so steep that you are really stressing your joints.  If you are a chi runner, you really have to sit back, which in turn really works your quads!  There were boulders, roots, large puddles (aka ponds) to navigate.  Many required a backwards climb down.  I have no idea how most of the people RAN this course without breaking their necks.

Of course we were next to last, but they knew us.  I warned them at the beginning, so we were "the three." I couldn't imagine navigating that with more than a few people either!   The path would go down a few hundred feet, then back up.  It did this for miles.

Then it opened up into this really cool meadow.  Of course I don't have a picture of it, but hey I was taking pics with my phone while doing this 'run' and my brain was gone by then!  The meadow had tall grass, really different flowers and a view.  Until about Mile 6, we kept saying that it was worth it, so beautiful.  We kept saying "oh yea this is going to make ANY other race seem like a piece of cake."

Mile 8, one of the 3 of us said "I'm done."  Well guess what, there's no where to go but DOWN, so we pushed on, pain, mud, sweat, and all!  Right about the same time the bugs were insane.  They weren't biting, but they were buzzing, flying into mouths, noses, ears.  The ear thing was making me insane.  Ali said "we're getting a real upper body workout too from swatting these damn things."  With each swat I would hit 3 or 4 of them. YUCK!  bzzzz, bzzzz, bzzzz.!

The nice thing though, was we passed several little brooks, waterfalls, and the air was not that bad.  Shady, a little breeze, and it was still pretty!

Luckily I had my Garmin, we knew how far we were.  No mile markers would make me insane.  We knew we were close when we crossed a road and we saw the tower, it was WAY up there again and we could see the itsy bitsy hang gliders flying around up there. (Look to the left of the peak to see them).

Eventually we made it to the finish line. We did it!
The volunteers waited for us too!  Thank you!

Then a 2.5 hr ride home, yuck!  It is now Tuesday, I still cannot walk properly.  My calves are so tight that I'm not sure there's muscle there anymore, perhaps just cement!

So, yes, this was the coolest thing I'll never do again!  Definitely worth a bucket list, or to say you did it, but WOW, just WOW! Hopefully that will make the Half Ironman seem easy!

I know I owe a ton of blog posts! I'll get there, it's hard with scheduling training and that pesky work thing.