Wow, it's been a while and BOY has it been quite the spring and summer!  I feel like if it can go wrong, it will!  The earth is going crazy, weather is insane!  I mean from blizzard snow to 100 degrees in New England for several days.  How can we not think we are in purgatory?

There are parts of me that are NOT STUCK - my ribheads continue to have a mind of their own and that slows me down.  That and the dislocated shoulder were two of the things that kept me from doing my Half Ironman this year.  The event was very inspiring AND emotional.  I went anyway and saw my friends cross the finish line.  I wish I was doing it, but life had a different agenda for me!

As if the dislocations weren't enough my mom was in a bad accident in May.  Someone was texting and driving and hit her head on!

People - DO NOT TEXT AND DRIVE!   - it's not worth it to put someone in the hospital (OR KILL THEM).  She's been in a rehab hospital for 2 months and counting with numerous broken limbs.  I tell ya, I'm afraid of cars while riding my bike, but I never even considered that one would cross the center line and hit me head on!  -- now I think different!  (GET YOUR ROADID).
I haven't written and I feel bad about it.  So much has happened, but most of it icky news.  I went for a ride on Saturday and a thunderstorm was rolling in.  My friend said "eh will you melt?" I just said "HAVE YOU MET ME???" - I WOULD get struck by lightening, but would live to tell about and have some weird story.  So, we went a different way to avoid the storm.
On Sat we rode 67 miles, my longest ride ever and I hit my highest speed ever - 42mph!  It felt AWESOME!  I finally have my aerobars adjusted to where I need them.  They cut almost 2 inches back.  That is a gigantic adjustment!   Then on Sunday I was a swim angel for the Danskin Triathlon in Webster.
I love being a swim angel / swim buddy!  You all have seen my post Oh yea that's why This is the best job at a triathlon!  The last two days have helped me get 'unstuck!' 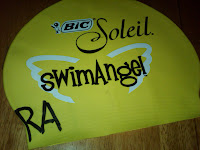 I have 12 days until my Pan Mass Challenge - oh yea I haven't written about THAT yet either!  I'm riding 192 miles for an amazing cause!   I'm riding in honor of the most amazing 2 year old little girl who is battling brain cancer(and kicking Ass!).  The PMC is so awesome that 100% of rider donations go directly to the Jimmy Fund (no admin, not even credit card transaction fees)!!
Visit Laura Backus's Paceline page at this link: http://www.pmc.org/profile/lb0212  to read more about my ride and to donate! I have a goal of $6400!
I will write more I promise!  I'm trying to find a helmet-cam so I can document the PMC in VIDEO!!  I'm already finding such inspiration in this event and I'm not even there yet! (anyone have one I can borrow?)
That's all for now!
Posted by Laura at 9:24 AM