A New Way to Adjust Your Shoulder

I know I said I was going to write about happy things and other people but I swear I can’t make this stuff up!  I have a bunch to say but I’ll keep today a little light, I think it's what I do best.  A bunch of things have happened over the last couple weeks and I swear I am that cartoon character Cathy, although my friend Alexis keeps calling me Murphy..
Over Memorial Day weekend John and I went to in Northern NY.  It is SO nice to ride there, not many cars and lots of pretty scenery!  I was very excited to go to camp this year to RIDE and RIDE and RIDE.  Mother nature had different agenda!  It POURED most of the weekend.  I had ONE nice day, so I ventured out on an (intended) long ride!  I stopped to take a picture of these very curious horses. 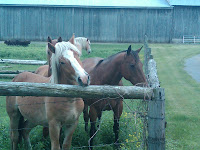 After taking the picture I went to step on my pedal and just missed the clip and stumbled on the handle bar a little with my elbow and forearm then heard this disgusting pop in my shoulder.  Next thing I knew my shoulder was in my ear (no exaggeration).  Now good or bad thing, my EDS is what allowed it to dislocate so easy, but I could put it back easy enough too.  So I rode home, cursing!
The next few days were pretty ugly, I was literally crooked.  I had to hold my arm up, but I'm pretty much made of jello so unless you really looked at me or I told you, you wouldn't have known.  I don't know why I didn't take a picture! I do for everything else! (as you will see in a minute).  I had the chiropractor and the massage therapist look at it and put it back.  The problem with a dislocation is mostly muscles and ligiments around it, when you dislocate you sprain and strain them. My EDS makes things a little weird so I can just 'hang' with it.
So guess what.. my Half Ironman is out this year :(.  I'm not counting on it being in next year either but you never know, crazier things have happened.
I was a little nervous to get back on the bike, I wanted to rest it. I also had a family crisis (I'll write a separate post/public service announcement about here shortly).  So I didn't ride OR WORK OUT for almost 2 weeks!  YIKES!
A couple friends decided to go for a ride on Sat. It was supposed to be nice and we were to meet up for a 30-50 mile ride on a bike path!  Sunshine, no cars,  etc.  Well... it poured.  I've never been so dirty, but that I have to say, was pretty fun.  I didn't enjoy cleaning my bike, but playing in the rain like a 10 year old was cool. 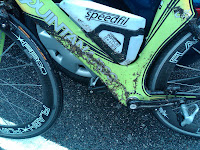 ﻿The first part of the ride was muddy, I was learning how to paceline!  This was a "treat"
The ride was flat, wet, dirty, and pretty fun -up until Murphy took over..
We turned around in an area that was pretty, and I'm sure it would have been even better had the SUN made an appearance! 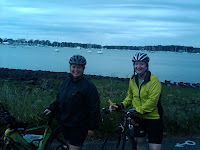 My shoulder started to really bother me around the halfway point so I told my two riding partners to just go on without me. I was REALLY slow, they were hesitant but I insisted.   The bike path crosses traffic in a few places, and in those places there are STOP SIGNS!  The key word here STOP.
I approached one of the crossings, I saw a car so rather than "yield" I went to stop and pull my foot out of my cleat.  I don't know what happened, DIRT? STUPIDITY? but I just FELL OVER!  It was like a slow motion cartoon.  WWEEERRROOOOOPOOFFTTT  Complete with the bike flipping up in the air and my feet still attached.  The car stopped and was very concerned.  I could barely speak because I was laughing so hard.  Then I couldn't get EITHER of my feet out so I had to remove my shoes to get untangled from the bike!   There's nothing like falling over BY YOURSELF to make you feel so stupid, but MAN it was funny!
Then I realized "CRAP" I just fell on my dislocated shoulder!  I had no idea what would happen, I could move it, nothing appeared to be broken.  I had a little scratch on my thigh from landing on a stick, and I took a chunk out of my handle bar tape but that appeared to be it.  I thought I'd move on!
I started moving again and then see my two friends STANDING there, I thought "CRAP" did they WAIT FOR ME??? - nope flat tire, AND missing tools too!  (so all of you reading this? check your tool bag make sure you have everything you once thought you did).
We rode for another couple of miles and ANOTHER FLAT!  Seriously?  I couldn't stop laughing.. REALLY??  So at this point my friend just stopped and had us come get him with the car.  When I eventually did get to him, his SHOE was stuck to the pedal!  Really, REALLY wasn't our day!

So, after the 30 mile ride, I get in the car and my leg was starting to hurt a little more.  I realized that maybe I hurt it?   Every day this bruise has turned a different color. It's along my IT band on my leg and is the craziest bruise I've ever had! 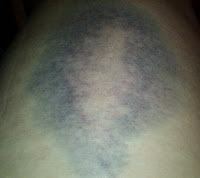 ﻿
Now the most bizarre thing... I must have fallen in the most perfect spot, because my shoulder feels SO MUCH BETTER, I think I shoved it back in place by landing on it!  So who needs the chiropractor anymore, I guess I'll just go fall down next time!