Connections and a Storm

I  took a little break from racing after the 50 mile ride  and went to Jamaica.  I thought it would be for a relaxing trip.  I would get to swim and dive and just hang out with friends in the sun.  Mother Nature had a different plan for me!

The next day I swam 1.17 miles along the coast. It was amazing to just swim straight, no real waves, boats, and relatively clear water.  I could see eel grass, starfish, the occasional fish such as a puffer.  I didn't even notice the distance and I'm sure I could have done 2 or 3x the length but I didn't want to bore John to death on our first full day of vacation so we returned. I figured I'd have 8 days to swim lots of miles!  I did notice that the quantity of fish seemed to be lacking and it was a little more murky than usual but didn't really think  much about it until a couple days later.

We also went on a dive that day too, it was a nice dive to about 60 feet.  We didn't see much except coral, some adolescent fish and TONS of lionfish.  The waters of Jamaica tend to be over-fished but I think the lionfish invasion is really decimating the coral reefs!  It really makes me sad!

Unfortunately I didn't get any pictures of the dive because my camera broke.  I KNEW as soon as this happened that we were in for SOMETHING - Silly me, I just figured it would be a really cool dive such as seeing a Hammerhead shark, or a whale shark or something like that, I didn't even fathom it would be a tropical storm and I would be taking pictures with a Blackberry!

The next day we woke up early and went for another swim, this time with another friend.  He had only swam 1/4 mile up until this point so we set out for 1/2 mile. (I know I'm mean).   Half way through the swim the swells started to pick up and if you would breath to the outside you would get a face full of ocean.  This half mile was definitely harder than the 1.17 I did the day before!  Little did I know, that was the last open water swim I would have for the YEAR.

We watched the weather report and noticed this large weather mass "tropical depression 16" just SITTING on top of Negril.  This storm eventually turned into Tropical Storm Nicole and really put a damper on our vacation.  It just POURED the whole time, the ocean, which is usually flat calm, was a wreck, and there was so much devastation to the sealife. 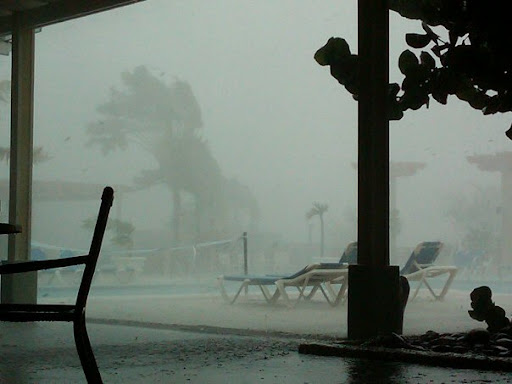 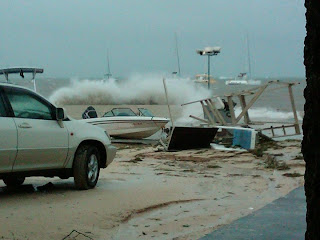 We entertained ourselves with lots of silly games, and no real working out.. except one day Kevin and I went to a spin class!  Kevin was speaking with the instructor and she was a new triathlete!  She talked about doing "just a mini" tri, and I sorta yelled at her to be proud that its not "just a mini", it's a sprint and she should be proud.   In that respect I told her about this blog and she said "ya know what? I've actually read that!" (!! seriously??? how cool is that?). -


We eventually returned from Jamaica, NOT rejuvenated, NOT rested, and NOT ready for work.  BUT on a good note, I had a Sorority reunion the following weekend so I was getting BACK on a plane in a few days to go party it up with some old friends!

Partying and vacation really will take a toll on your EATING and EXERCISING habits!  I know that anytime I go home to Pittsburgh that I'm going to have a Primanti's sandwich (or two) and if I'm lucky, some Perogies! This is a large pile of greasy heaven! YYYUUUUMMM!!

I was pretty excited to see my sorority sisters after 15+ years, but it was like we never missed a day.  The thing that got me AGAIN (I'm not sure I'm going to get used to this), is the people who came up to me and recognized the blog.  Sisters who told me it was inspiring and that they were doing something because of it, or were just simply proud of me.  Awesome, simply awesome!  --Really, I don't think I'm going to get used to that, but its going to keep me writing.

I do know that I have to get back on the horse, I'm sure I've gained weight and lost muscle in the last month.  I'm going to be helping my training partner with bootcamp over the next few weeks so hopefully that will get me started. It will at least get me up long before the sun!