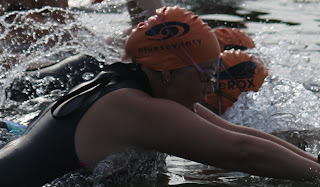 I do love going to the SheRox/Danskin races in Webster for two reason:
1). they're in my backyard
2). so many newbies

These two races are GIGANTIC!  I've participated with any number from 1500-4000 women, yup that's not a typo 4,000!!!  I love seeing the women there, all shapes, sizes, ages (yea you can see everyone's age advertised on our LEGs)!  Many of whom its their first tri, but for most of them it won't be their last! It is so addicting!  I am so damn slow, yet I can't stop!  Sunday was race # 6 of the season!  I'm getting comfortable with being last! (at least this time it was just last in my age group).

I am amused at the quantity of CRAP people bring to transition though, most races require you to walk and/or ride your bike, yet people pack for the weekend!  I saw bags big enough to carry a body home (or maybe that was the point?).  You need the gear that you're going to USE during the race, not every contingency known to man... people its not going to SNOW in July.. you aren't going to need a blanket, you aren't going to need 43 pairs of socks.. and for heavens sake, you don't need a comforter and pillow set out in your transition area.  I did wonder if some folks were going to take a nap in transition!  I felt junk-envy when I saw the woman across from me, she had about 1500 calories worth of energy packs.. 1500 CALORIES!  do you know how long of a race you'd have to do to burn that???

Ok in all seriousness, packing for race day has actually become pretty easy for me, especially a sprint!  My bag seems to pack itself.  The day before, my bench seems to "collect" gear. - Then as I pack my SMALL BACKPACK, I make myself a little "woman" - I say "swim, bike, run" and make the little woman out in how I would look in each sport.  This way I won't forget anything.


Unfortunately this race was yet another one that just about killed me though.  Saturday about 4PM, I started to get a migraine, and not just a normal one!  A really, really bad one!  I was getting pretty bummed because we had so many people from the group doing it, PLUS I was hosting the after party! I've never once thought, "I am not doing this race." but about 6PM, I thought "if I feel like this in the AM, I'm not doing it."....


Lots of drugs later, and probably 2 hrs of sleep later, it was time to get going!  Even though I ate properly, I'll spare the details but suffice it to say I was not properly fueled for the race!  I didn't feel "as bad" in the AM so I decided the show must go on!  Thing is HUGE races take FOREVER to get going, there were 23 waves of over 100 people in each wave!  4 minutes a wave!  It was after 8 before I even got to swim!  By the time I got in the water, I needed more drugs.   It was pretty funny to lay out drugs with my Gu on my tiny little towel in transition.


I had an ok swim, there was no way it was 1/2 mile ;)..  I tried something different this time.  I'm normally an outside back of the pack person, this time I tried outside and FRONT.  The Danskin & SheRox races are SUPER polite so I thought if I got kicked today it wouldn't be that bad.  Turned out  I kinda liked it.  I had lots of feet and arms all over the place, and had a few abrupt noodle stops (people with noodles standing in my way) but other than that, it was quite nice!  I even saw a big box kite out there, I might have to go try to find it again later.


I probably would have had a better overall time but I just moseyed along to T1.  I could have taken a rest in one of those comforters/pillow stations.   I jumped on the bike and went for a ride.   The ride was pretty nice because there were lots of people for me to pass!  That NEVER happens, and especially when I didn't feel well, this was a little boost for me!


About 1/4 mile from the end of the bike, there's a big cluster of people, spectators, runners, bikers, etc. This woman on a bike was ALL over the road, and would not let me pass her.  My choice was to get hit by a car, run over a runner, or just sit back and watch her COAST down the road, she wasn't even peddling .. so aggravating. 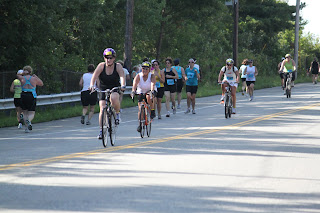 I eventually passed her and sprinted down the last 25 yards.  I was actually mad at that point so I ran to T2.. kinda funny for me!  Then the run UGH!  Migraine, AND my miserable running ability - I decided to run/walk every .25 miles.  I actually kept up with that, except the few places where I knew people. They made me run longer (thanks guys) btw, I use the term "run" loosely.


I rounded the corner toward Waterfront Mary's expecting to see the old lady with the hose, she was not there.  She was about 100 anyway :( how sad- I missed her, I'm sure about 2000 of us missed her.


Once I rounded that last corner, I knew I had just over a mile to go - woohoo!  I really thought about swimming though, I could have jumped in the lake shoes and all and swam to the beach no problem!  It would have been easier than the run!


I love rounding the corner to Webster lake, its FILLED with people cheering you on.  I knew I could run in, so I did.... then .. thank goodness, it was DONE!

We collected the group, and went to my house for a cookout! 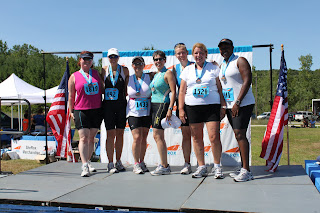 Congrats everyone for finishing, and for kicking ass, and for really having a fun party after!  Anne, Alexis, Me, (the tall one) Mireya, Julie, Pam, Stellah!